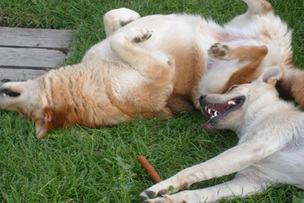 We have two rez dogs in our household here is Salt Lake City, Utah. Both were adopted from Blackhat Humane Society, although we got them four years apart. I found both dogs online through Blackhat’s website. The first dog we named Sandra  Day O’Connor, or Sandy, in honor of the retired Supreme Court justice. The  Second, Jack Rascal, we adopted just this past May (2009). Both were homeless  strays found, coincidentally, around Chinle, Arizona.

Chinle is in the  central part of the vast Navajo reservation and, like many parts of the rez, has  a serious and heartbreaking problem with homeless and feral dogs. They eat  anything they can catch or scrounge out of garbage cans. Blackhat’s mission is  to foster and find homes for some of these dogs, many of whom, at the time they  are rescued, have obvious health problems due to the circumstances of their  lives.

Sandy, who is probably part coyote, was the bigger challenge for  me. She was timid when I brought her up here to the city. Mostly it was just  sensory overload. The noise, commotion, and the other dogs and people everywhere  freaked her out. But I took her and my old golden retriever, Hannah, everywhere  with me and in a short time she realized that when I opened the back of my  little station wagon and told them to get in, we
would go on a fun adventure  somewhere. She sailed into the back of the car.

Life is pleasant for  Sandy now. She has gone on many road trips with Hannah and me and she is a great  traveling companion. We have gone to nearly all of the states in the west  together including many trips to Coronado, California to visit my best friend,  Nickie. Sandy loves Nickie and Coronado, which has an off-leash dog area at the  local beach. Sandy loves to chase tennis balls in the surf and it is amazing to  watch this former rez dog, who probably never found enough water to wade in,  much less go swimming, fearlessly dive into the waves as they crash over her  head.

Jack Rascal is our newest Blackhat buddy. I certainly didn’t need  a third dog but when I saw his photo on the Blackhat website I couldn’t resist.  He was another homeless rez dog, in poor health and not very good looking. He  had a pretty bad case of mange on his face and legs and part of his tail was  missing. He was probably about a year old.

After researching mange and  learning that the type afflicting Jack was difficult to eradicate but not  contagious, I decided to adopt him. Jack immediately went to our wonderful vet,  Dr. Dan Good, in Salt Lake City. Dr. Good had at one time worked on the Shoshone  Reservation in Wyoming and has a soft spot for rez dogs. He was able to cure  Jack’s mange over a period of two months.

(Editor’s note: Blackhat  guarantees the health of our animals. In this case, the volunteer warned Lisa  that Jack was being treated for mange, and she made the decision to take over  his treatment.)

Sandy was absolutely furious when I got Jack Rascal. She  didn’t hurt him but she sure wanted to get rid of him. That lasted about 36  hours and then they were playing together in the back yard and chasing each  other in and out of the house through the dog door. They are best friends now  and love each other. Both dogs learned the rules of our household very quickly.  Neither has ever had an accident in the house. Both Sandy and Jack Rascal  adjusted to life in the city with the help of Hannah. She has been very patient  with both her new friends and she has had a very good influence on them.

When I look at both Sandy and Jack Rascal, I see two dogs who are  intelligent, loving and appreciative of what they have been given. Had they not  been rescued and adopted they would likely not have survived much longer on the  rez. The life expectancy for homeless rez dogs is short and it is a brutal  existence.

While I could easily have gone to the local shelter and  picked out two wonderful dogs that would love me as much as Sandy and Jack do, I  chose to go through Blackhat and adopt from the Navajo Reservation. Blackhat  volunteers screen each dog to learn about its disposition, whether it gets along with cats (both of mine do) and children and, if the dog is with them for  awhile, they will begin to teach it basic manners to help it adapt to a new home  off the reservation.

Adopting from Blackhat obviously helps the dogs,  but it also helps the Navajos reduce the dog overpopulation on their  reservation. It has been a big
adventure for me and I am very proud of my rez  dogs!