Why a Rez Dog? By Stephen Peterson

Why a Rez Dog? By Stephen Peterson 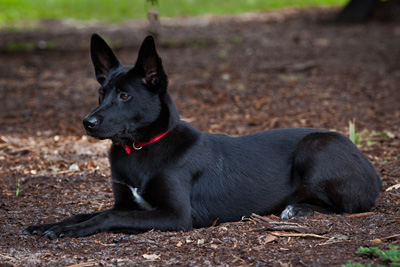 While scouting out Shiprock for a late afternoon shoot, a young dog came out of the rocks at the base and sat in front of me whining. She was hungry and covered  in dried mud, but otherwise looked to be in good shape. She hung out with me for  a couple of hours until the light got right for my afternoon shoot. I could not  leave her. After sneaking her into a motel room in Farmington and giving her a  bath, we spent the nite together. The rest is history.

I was finally shamed into getting my camera gear out of the truck where it has been for nearly  a month since my return from the Western Adventure. This photo is not great but  it’s the best I could do at 1:30 PM yesterday. She is untrained and getting her to hold still is a challenge. She is around 6 months old and weighs 27 lbs. She  is a natural herder. Some say she looks dingo, some besenji, some skipperke,  foxlike or maybe part coyote. She was born tail-less and has a different look  when she runs because of that. Her fur is about 3/4 inch long and catlike, it is  very soft with almost no undercoat and no guard hairs. She seems to be quite  intelligent and stalks squirrels and other prey with the patience of a cat. Probably she has never been in a house before ours, but has adapted remarkably  well. She swims, loves to ride in my truck, is not afraid of thunder or lightning and gets along well with other dogs and people. She sleeps on the  floor next to me and does not get up during the night. She was totally  house-broken from day one, no mistakes, ever. I am happy she found me and delighted to give her a second chance at life.

This is where Luna, a small black, hungry and muddy pup found me (see photo below). She came out of the base of the great Shiprock as I was scouting for my afternoon shoot. I have been interested in the Shiprock since the first time I flew west as a brand  new National Airlines pilot over 30 years ago. The crusty old captain I was  with, explained how the early settlers in wagon trains had used the rock as a  guide on their westward quest. It could be seen for many miles and pointed the  way for them. We could see it from a hundred miles out flying by at 37,000 feet.  This was the first of hundreds of trips west that I would make as a National,  Pan Am and eventually Delta Pilot. But I will always remember that first trip.  It marked the realization of an impossible dream that a 16 year old boy had, of  one day becoming a National Airlines pilot. After what seemed like a lifetime of  schooling and training, including a little stopover in Viet Nam that lasted a  couple of years, I was finally there, at the Great Shiprock, and it was pointing  my way west.

The Shiprock is actually a volcanic plug that rises over 1500 feet from the desert floor. Just imagine the awe of the settlers as they  moved west past the Shiprock and then Monument Valley, eventually coming to Glen  Canyon and the Colorado River. I was excited to be on the same path as those early wagons trains and headed west as well. I found Arizona to be a landscape photographers dream. From there I moved up into Utah where I found more “out of this world’ landscapes. I don’t really know what drew me back to the Shiprock as I headed east for home. I actually had to go out of my way to get there. Maybe it was the little black dog  that willed me back. I named her Luna, partly because I found the landscapes out  there to be ‘other worldly’, but mostly because it just seemed to fit.

Luna is adapting well to her new surroundings in southwest Florida. Six  weeks ago I couldn’t imagine having another dog. Today I couldn’t imagine not  having Luna. I turned her loose in the woods today with my Florida cur and it  was like releasing a fish back into the water. She herds the cur
dog, who was  bred to herd cattle. As excited as she was to be free in the woods for the first  time since I found her, she came running back to me when I called her and went  right into a sit. She is the star of her obedience class and absolutely the  teachers pet.

This  is an amazing dog and everyone who crosses her path wants to know what she is  and how I got her. She rolls on her belly for four year old kids to pet her and  body slams and herds pit bulls, shepherds, labs and any other dog that wants to  run with her. So far there is no dog at the dog park that can outrun or  outmaneuver her. Did I forget to mention that she is the best squirrel dog I  have ever seen. She has the patience of a cat and the keen eyes and nose of a  coyote. She weighs in at 27 pounds and has grown a little in the last month. She  was 24 pounds when I found her.