The Story of Shadow (now Shady) By Jessica Sosna

The Story of Shadow (now Shady) By Jessica Sosna 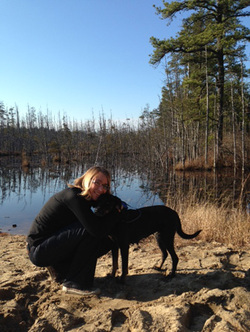 My boyfriend and I planned a 10 day trip out west (we live in New Jersey). I had wanted to go my whole life, he had lived there for a few years. Of course it was during the Government shut down, so we had to do a lot of off the cuff stuff, including staying on campsites that we could–meaning ones that were open and/or didn’t have a gate up! This lead us to Bluff, Utah where we were checking out some 8,000 year old petroglyphs at Sand Island Recreation Area near Gooseneck State Park. We had a great night camping under the stars and awoke in the morning to see a rather shocking sight: a completely still dog with eyes the color of the desert perched about 10 yards away from our site. I had mentioned how rude it was that someone was letting their dog roam around something so sacred, but then realized very quickly that the dog was not with humans and was completely emaciated. I have never seen something so terrible. I immediately told my boy friend who was making breakfast and we proceeded to give her peanut butter on bread, unfortunately all we had at the time being near the end of our trip. Justin evaluated the situation and decided to Google the nearest animal shelter (thank goodness for smart phones!) He was given the number for Kayenta Animal Care Center. They were about an hour away from where we were and we decided we could not just leave her. There was no way I would ever be able to live with myself if we left her there – she would have never made it. With the government shutdown and end of season, no one was there to help her.

That day we had planned to visit the Valley of the Gods, which is all I wanted to do on this trip. We drove right past it and on to Kayenta. Along the way I promised Shadow (who we lovingly named on the drive) that I would not abandon her and I promised we would make sure she was safe no matter what.

We then left her at Kayenta Animal Care Center and never even made it to Valley of the Gods–I was just too sad.

We then returned to NJ and my main mission was to get her to the east coast. I couldn’t keep her because my roommate is allergic, so I then had to try to find her a home. In the meantime, though, I had to figure out how to GET her here! Arizona to New Jersey is not a quick trip! I spent days looking through forums and websites. I hit dead ends at every attempt… I was getting restless and upset. I then posted the story on my Facebook and one of my friends replied–he had seen my post and helped me search for a rescue group. He then found Blackhat Humane Society! He reached out to you and then when he heard back, he forwarded the message to me. It was too good to be true – you wanted to and could help!

We then needed to get Shadow fixed and vaccinated, so those were the next steps. Once she was ready, you miraculously had someone traveling east from your rescue group – it was almost fate! Being in NJ – You had someone traveling to Illinois, almost halfway to New Jersey. I figured – that’s better than driving all the way to Arizona. At this point, my older brother had also volunteered to adopt her and I was blown away at how selfless he was to offer.

My father and I then packed our car and headed out – driving the 16 hours all the way through to Illinois! The excitement to meet with shadow again was killing me. We spent the night in a hotel to rest, and the next day reunited with Shadow! The emotions I was feeling were indescribable… her coat was shinier, she was wagging her tail and she was HAPPY. And she remembered me! (I like to think that 🙂 )
We made the long and terrible drive home – but Shadow was so well behaved and slept the whole way! She was a little nervous – but I think I would be too if I was in the car for the last 24 hours and stranded alone in the desert before that!

Once we got home, we took a long nap and then ventured over to my brother’s house so they could meet! Shadow loved it there.

Andrew has a HUGE back yard that backs to the woods and lots of treats and a warm bed all for Shadow.

She is now called “Shady” and has gained almost 20 lbs since we first met her in the desert that fateful day. Her coat is soft, she is gaining her personality, LOVES to take walks in the pine barrens (it is different dirt than the desert and she loves it!! 🙂 ) and is wagging her tail constantly. The love that she has brought to our lives and my brother’s life is something that can’t be measured. She will be greatly loved and will have a wonderful life here on the east coast. She went from desert pup to east coast chick and she is loving life. I look forward to many years, camping trips, frisbee throws and all around love with our new girl. My brother is so happy and she has forever changed his heart.

I was angry at the government shut down at first – but if that didn’t happen, we would have never traveled to that campsite and would have never met our new family member. Thank you Blackhat Humane for making it possible for our girl to come home – we couldn’t be more excited!