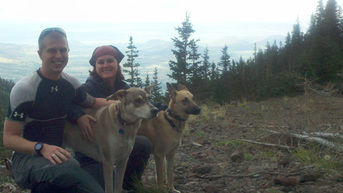 It’s hard to believe that it has been over a year since I convinced a very young, scared, German Shepherd blonde beauty into my apartment. At first, Spock was very skittish and terrified of even my friendliest advances. After a few weeks, however, he slowly began to come out of his shell. Months went by, and even though Spock was trained, quiet, and friendly, he still wasn’t receiving interest from potential adopters.

In November of 2011, the annual fall adoption day was taking place at the PetSmart in Flagstaff. I decided to take Spock and one of my foster puppies. Of coarse, as we were leaving, tricky little Spock decided to escape the fenced in yard. Due to Spock’s fear and anxiety, he was a very difficult dog to coral and get into a car. A half hour went by and I was about to give up since I was running late, but after a last ditch effort, I got him…and thank goodness I did! Once in Flagstaff, Blackhat set up their display, and Spock was sitting quietly in the pen, letting the various little puppies crawl on him and chew on his oversized ears. People came and went, infatuated by the cute puppies, but no one  seemed to be interested in the quiet goldie sleeping in the corner, and my fears  began to mount. Little did we know, our luck was about to change.

As we were talking to other families and couples, a young woman stopped by our pen and quietly regarded Spock. I could tell her interest was peaked, and introduced myself. Soon after petting him, she was in love, not only with the beautiful dog, but also with his quirky name! Hayley called her husband, who eventually brought their other dog-child, Goliath, for an introduction. It soon seemed to be a match made in heaven and an adoption contract was signed! I couldn’t believe my joy, and new it was truly a good home when Spock’s “grandparents” also came to meet him!

However, unlike most happy endings, Spock’s story wasn’t over. While being prepped to be fixed, it was found out Spock had a heart murmor. Hayley and Hans still decided to adopt Spock despite the issue, and soon after bringing him home, took him to their vet. It turned out Spock suffered from a serious heart valve condition, and would need $5,000 heart surgery.  Most people  would have given up, but not Hayley and Hans. Through a charitable website,  Spock’s family started a fund called “Live Long and Prosper, Spock,” to help  raise the money. With the dedication, love and donations from friends and  family, the money was raised, Spock had the surgery, and all was a success.

I have had the privilege of keeping in touch with Hayley, Hans, Spock, and Goliath over the past year, and have seen him numerous times. If you knew Spock a year ago, and compared him to the happy, confident, handsome guy he is today, the transformation would astound you. The power of love in a rez dogs life is incredible, and Spock’s story is proof!